The Hidden Pirate Treasure of 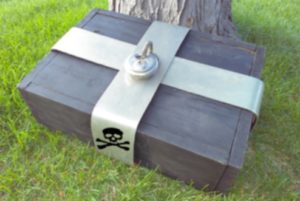 Nasty weapons and jewels of golden gems. Coins and baubles from Neptune’s den. Don’t cut yourself. Those antler handled swords are real, and that big fat emerald too. Shiny gifts of the sea and land, and you may recognize some of it from my Treasure Blog.

And before you start saying “Hey…that treasure doesn’t look like it’s worth very much. Maybe I should just buy beer instead…” Then consider this: inside the chest there is also a map to an actual Spanish Gold Mine, a scroll that tells the story of where everything came from, and a USB key with a whole bunch of cryptocurrency on it too…so I honestly don’t know what this whole thing is worth. $$$$???

You have to read all Three Puzzle Booklets to find the chest. Then use the clues in the three short stories to crack my Picture Puzzle Code.

Seek you as well…the two lost halves of the Copper Map.

Oh yeah…and don’t die. I could hardly stand it if somebody got eaten by spiders or hawks or gophers or something. So keep your wits about you out there. Please.

***NO (zer0, zip, zilch) historical artifacts were harmed in the making of this game. All on the up and up here amigos. Everything is bought and prospected/detected for. Indiana Jones was a tomb robber. I’m an Underwater Anthropologist. Good luck!